As is evidently from the name of the breed the origin of Westie is in Scotland, more precise Scottish West Highland. The Scotland itself is dived on two parts; on more populated Lowland and on less populated countryside Highland, which is known for rocky, hilly countryside with twilight. 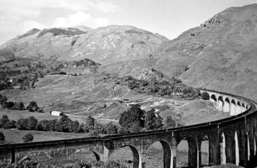 Famous Scotland’s viaduct of West Highland railway in Glenfinanu.
Because of climate was here impossible to bred numerous species of domestic animals; exceptions was some sheep breeds and mountain goats. Because the country is rich with waters full of fish so fishing was developed. The great enemy of this trade was and still is a fox. So they needed endurable and fearless dog which was ready to warn on danger and go to battle at any time. For pursuit and destroy foxes and rodents they needed fast pursuer with strong jaw and good bite. Majority of terriers have that attributes. Amount of all this qualities was enough for hunting as for keeping sheep pens safe up to invaders which was followed by dogs which goes over their limits for that. Terrier’s popularity was growing and some new tips of terriers appeared, but part of them extinct.

Ancestors of West Highland White Terrier – or on short Westie – were as ancestors of breeds that was related to him (Sky Terrier, Yorkshire Terrier and others) known in 16th century. That was group of dogs which origin was Scotland and have common name Old-Scotland Terrier. Color of these dogs was different from dog to dog, but majority dogs had coats in dark color. But even color of sand, yellow-brown, red-brown color at some terriers stay in standards until today. 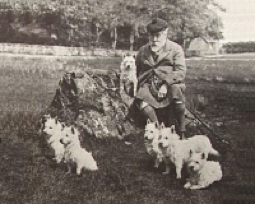 All terriers had in the past and they still have great hunting abilities, but because of the color of their coat was noticed that it was hard to distinguish between them and other animals, especially in the twilight and at night, which was not good for them. Thus, breeders of terriers were convinced that white dog is not appropriate for hunting – until the second part of 19th century. They even believed that white dogs don’t have the same hunting abilities as dark dogs, because of that they take out of breeding all dogs with white or bright colors. Concrete iniative for crossing from dark colored terriers to bright colored terriers was an accident. On fox hunting one of the dogs was shot by accident, because of bad recognition. This happened to colonel Malcolm from Poltalloch (Argyllshir). Sadness, because of this occurrence when he by accident shot his favorite and most working dog, contribute to a decision that he started breeding bright and white terriers from that time. In spite other breeders he let just white or almost white puppies in litters and from his breeding dark colors disappear. 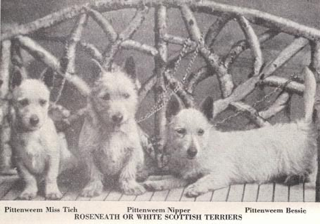 1899 – White Scotland Terrier
But something indicates that colonel Malcolm was not the first who was breeding white short legged terriers. Suddenly white terriers appeared which already lived on British islands. But this white terriers has nothing common with ancestors of Westies. For example White Sky Terrier which was breeding by duke from Argyll or White Scottish Terrier bred by Dr. Flexman. These terriers extinct. 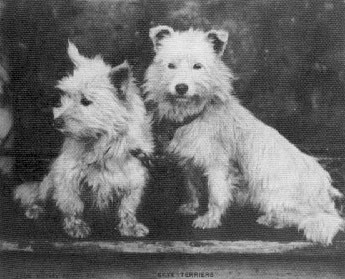 Progressively terriers from colonel Malcolm was known as Terriers from Poltalloch, recognized and very appreciated. These dogs were real ancestors of our Westie. Courage and abilities of Terriers from Poltalloch was a winning combination above dark colored terriers. They even have priority because of their bright color and where much better recognized in dark or in bad weather than other terriers. This argument was crucial for all other breeders. Interest for white colored terriers on the end of 19th century increased. In October 1904 was this breed recognized by Scottish Kennel Club and in January 1905 first club union was established. President of it was colonel Malcolm. This year was also English West Highland White Terrier Club founded whit numerous members. In this period terriers were already active on all breeds dog shows in Great Britain but under common name Scotland Terrier. To official recognition of Westie as independent breed named West Highland White Terrier came in year 1907 from British Kennel Club. This contributed to development and expansion of breeding. From 50’s interest for this breed was rapidly increasing, even more after uniformed Westie standard with robust and squared body, thick coat and round head. Even pretty demanding grooming on the start was simplificated latter. Maine care was coat on head where some different variants emerged, but goal of all was that head of Wesite must be rounded as much as we can and in balance with body. We have to tell that a character of Westie had some influence on his popularity. For that we have to say thanks to the knowledge of breeders, thus Westie stayed typical hunting dog with temperament but playful friendship and family character.

From 70’s onwards popularity of this breed no one can stop. He fast conquers England, United States and Scandinavia. Interest for puppies was growing. Breeders couldn’t satisfy demands. On short time commercial breeders emerged and the quality decline. Many dogs bought in pet shops and in puppy mills was suffering from depression and behavior faults. For all this was guilty bad breeding and bad care for puppies. Shape of these dogs is a way from breed standard. That kind of dogs latter became unpopular, undesired and they ended in animals shelters.

Only experienced breeders and owners of Westies that breed with love and are unselfish know that West Highland White Terrier was and is one of the most attractive dogs for decades and is not just a short termed hit.