The breed was slowly developing and in 1900 were still representatives of the breed on long legs and with silky hair appearing. To the public the breed was introduced the first time in 1903 at the dog show in Havorfordwest. In 1908 Fred Lewis breeding took in his hands and began with standardized breeding of Sealyham Terriers. At the same year the first standard was accepted. Two years afterwards Lewis on the dog show at the Crystal Palace in London presented some Sealyham Terriers and after several years of effort in 1911 the breed was officially recognized. In 1912 was founded the first club. That was Sealyham Terrier Club Badger Digging Association. From then on it seemed that the breed was on the rise but the increase of puppies stopped because of the outbreak of the First World War and breeding in the United Kingdom has almost completely stopped. After 1920 was breeding in full swing again and the first representatives of the breed have crossed the borders of Great Britain, most of them went to the USA. In the meantime Jocelyn Lucas started with mass breeding and in 1929 he published the first book about Sealyhams Terriers. For breed the golden ages began and Sealyham Terriers were present in large amount, not only as working hunting dogs but increasingly as companions and associates. The breed was seducing into the heart of the biggest stars of the time as those from Hollywood as those with blue blood. We can say that Sealyham Terrier was a real fashion hit at the time. 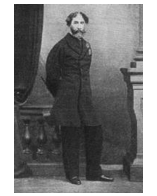 Captain John Edwards
About the origin of the breed we don’t know much because Captain John Edwards, who around 1850 began breeding didn’t leave any record about the roots of the breed. After the Sealyham Mansion in Pembrokeshire (South Wales) where Edwards began their breeding the breed was named. As we know the word Terrier comes from the Latin word terra (earth), thus Terriers form the group of dogs that were created for underground work (cavers), where they hunt badgers, foxes, weasels, otters, ferrets and squirrels.

However, we could still say that the ancestors of Sealyham Terriers probably are both Welsh Corgi as well as Dandie Dinmont Terrier, because these two breeds also come from Wales. It is also very likely that Edwards got Sealyhams Terriers with crossing now extinct White English Terrier, Fox Terrier and White West Highland Terrier. Breed which were used were certainly chosen deliberately because he wanted to breed the perfect dog. Sooner he was breeding Otterhounds which they appeared to him being too clumsy and with not much hunting instinct. Thus he was able to create a bold and powerful dog which is still enough small to work underground. 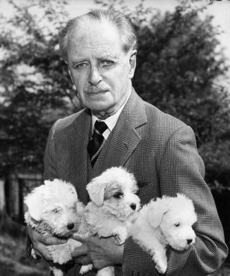 This golden period lasted only a short twenty or thirty years after that period was Sealyham Terrier literally forgotten. Some say that his popularity declined primarily due to the prohibition of the docking tails so he became aesthetically uninteresting and unusable for work. To the unpopularity helped even wire coat so some bred dogs with as softer hair and breed on the long-term inflicted further damage. As a result, still today in litters appear puppies with too soft coat. The decline in popularity is contributed by the fact that emerging smaller breeds are more popular.

It came so far that the British Kennel Club in 2008 declared Sealyham Terrier for the most endangered breed, thus per year is not born more than 50 puppies, to maintain the breed they should be at least 500 puppies born per year. For comparison we can cite the fact that in the year 1920 was born 2000 Sealyhams Terrier’s puppies. In October 2011, the British magazine Country Life highlighted the breed and put it on the cover with the title: “SOS: Save Our Sealyham”. Endangered of this breed was highlighted in some other British media such as BBC, Sky News and the Daily Mail. The currently number of this dogs is less than the number of mountain gorillas or Siberian tigers that are in the world considered to be one of the most endangered species. Thus, some representatives of the breed are also present in Slovenia.